But when The Economist next came to write about Ireland’s economy in 1997, they called it “The Celtic Tiger: Europe’s shining light.” 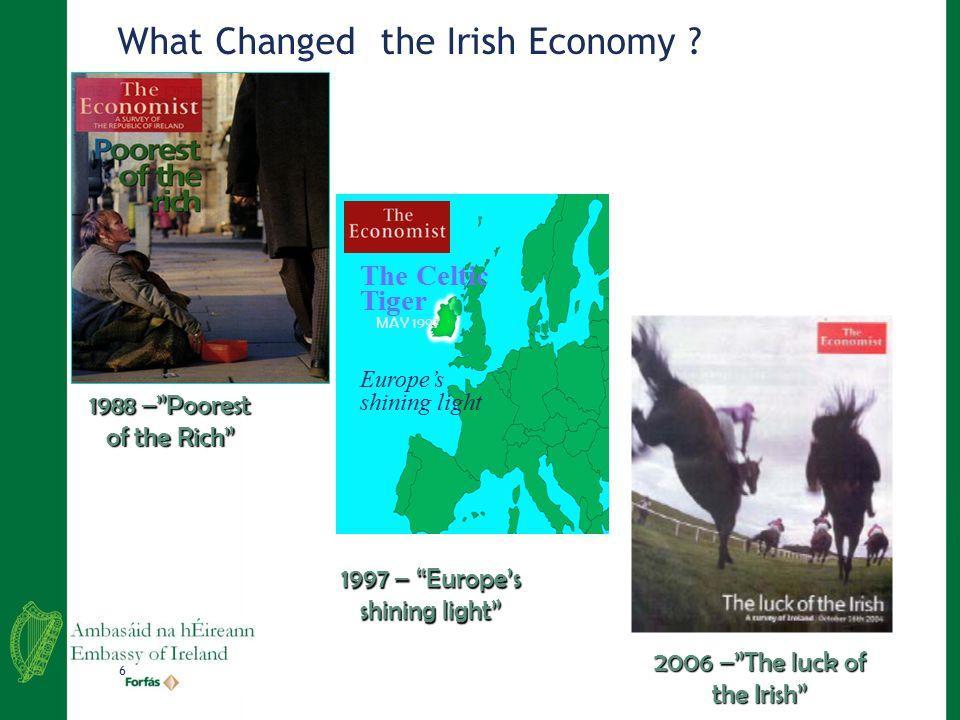 This led to a surge in the level of Irish per capita GDP after 1993. In 1997, Ireland overtook the United Kingdom on this score and, by 2007, was 27 percent above it and up to 96 percent of the United States’s level.

This increased prosperity worked wonders for Ireland’s government indebtedness. From 1993, government debt as a share of GDP fell rapidly, reaching 25 percent in 2007. By 2002, it was lower than the ratio in both the United States and the United Kingdom.

The Irish hadn’t found the mysterious pot of gold. They had simply embraced sound fiscal and monetary policies.

According to economist Dermot McAleese, in the years prior to The Economist’s 1988 diagnosis, Ireland had been plagued by “High taxes, low confidence, high labour costs, excessive regulation and anti-competitive practices.” And no matter how high tax rates were, spending was higher still, which meant large fiscal deficits.

By the beginning of the 1990s, it had become apparent that this could no longer continue. Acting boldly, the government—with wide support—slashed spending and made credible commitments not to engage in deficit spending or inflate the currency. It deregulated and drastically lowered tax rates. The 2002 Index of Economic Freedom, published by the Wall Street Journal and The Heritage Foundation, ranked Ireland the world’s fourth freest economy.

McAleese highlighted the importance of getting government spending under control:

The espousal of fiscal rectitude and new consensus economic policies was not in fact new. What was new was the decision to attack the debt by controlling public spending, rather than by increasing taxes. For a small, open economy, curbing public spending proved a far more productive way forward. It created room for tax cuts while simultaneously lowering the debt ratio. Another ploy was the introduction of a tax amnesty. Following on the high tax policy of the 1980s and the reorientation in fiscal policy, it proved hugely successful in terms of revenue generation. Domestic interest rates fell steeply as investor confidence grew, thus starting off that rare occurrence in modern economics, an expansionary fiscal contraction. Fears that strong fiscal contraction would prove deflationary were confounded, though precisely why this was so remains the subject of controversy.

That’s Gratitude for You

This is now under threat. You might have expected Ireland’s partners in the European Union (EU) to look at that country’s success and think, ‘Here is something to be emulated.’ Instead, they see it as something to be stopped. As businesses choose to locate in Ireland rather than high tax jurisdictions elsewhere in the EU, those higher tax countries are attempting to force higher tax rates upon the Irish via the EU.

Until now, the Irish have doggedly defended this. In 2008, the Irish voted to reject the European Constitution because, among other things, they wanted to safeguard their successful low tax policies. But in the EU, votes are not opportunities for electorates to make decisions but for them to rubber-stamp decisions already taken by EU leaders. So the Irish were made to vote again. They were given assurances that the new Lisbon treaty—the renamed constitution—would, among other things, affect their taxation policies. In 2009, they dutifully voted yes to Lisbon.

Of course, the EU never abandons an idea, it only delays it, and the EU started the year by coming for Ireland’s low taxes once more. At present, some decisions on tax policy have to be taken unanimously, giving countries like Ireland a veto. But the European Commission—the unelected executive body of the EU—is moving to end that. The low taxes upon which Ireland’s modern economic miracle are based are unlikely to outlive unanimity by very much.

Unsurprisingly, many Irish are not keen on being stripped of the ability to set their own tax rate.

“Ireland has used tax policy as a vital tool for economic development since 1956, “ says Ian Talbot, chief executive of Chambers Ireland. “As a small, open island at the edge of Europe it remains important that we retain some independent tools for competitiveness.”

A Province Once Again

The Irish Citizen Army, which fought against British rule in the Easter Rising of 1916, flew a banner reading “We serve neither King nor Kaiser but Ireland.” By contrast, Leo Varadkar’s Fine Gael government has loyally done as the EU told it to during the Brexit negotiations. If the Irish were hoping that their reward would be tolerance towards their low tax economic model, it looks as though they will be disappointed.

John Phelan is an economist at the Center of the American Experiment and fellow of The Cobden Centre.