The $22 trillion official national debt is a much discussed problem, even as politicians exhibit zero motivation to do anything about it. But as big an economic overhang as it is, government debt isn’t likely to trigger the next financial crisis.

Yes, servicing the growing federal debt bubble will depress GDP growth, cause the value of the dollar to drop, and raise inflation risks. But the bubble itself won’t necessarily burst – not anytime soon.

As long as politicians face no political consequences for deficit spending, and as long as the Federal Reserve keeps the Treasury bond market propped up… then many more trillions can be added to the national debt.

Globally, there exists $250 trillion in debt against economic assets of around $100 trillion. The notional value of all derivatives now approaches a quadrillion dollars.

U.S. household debt rose to a record $13.5 trillion in the fourth quarter of 2018. Mortgages, student loans, car loans, and credit cards represent enormous burdens even during a good economy. These burdens will prove unbearable for millions of Americans in the years ahead.

For many the financial crisis is already here:

Student loans now rank as the second largest biggest category of American consumer debt, just behind mortgages. The cruel reality is that many of these “gender studies” and “art history” type degrees will never be worth as much in the job market as they cost to obtain.

The main consequence of the government-subsidized student loan bubble is to enable college tuition and fees to rise at a much higher rate than salaries. It’s not that universities have had to raise costs to pay for top-notch professors.

Instead, the biggest growth in university hiring has been for administrators and “Diversity” indoctrinators who get fancy titles and plush salaries while providing little to no useful instruction.

It’s just one example of how easy money and distorted government incentives lead to malinvestment.

Another example, of course, is the stock market…

Investors in search of returns have bid up stocks to bubble heights following years of artificially depressed interest rates. Big corporations have tried to manipulate their own share prices higher by engaging in leveraged stock buybacks, even at lofty recent valuations.

Warren Buffett defended stock buybacks of Berkshire Hathaway in his latest letter to shareholders while noting such practices can be destructive if done regardless of value:

Assuming that we buy at a discount to Berkshire’s intrinsic value – which certainly will be our intention – repurchases will benefit both those shareholders leaving the company and those who stay…. Obviously, repurchases should be price-sensitive: Blindly buying an overpriced stock is value-destructive, a fact lost on many promotional or ever-optimistic CEOs.

The Fed faces another potential deleveraging event just around the corner in the corporate bond market.

The U.S. investment-grade corporate bond market has swelled to about $5.2 trillion, according to Bloomberg. That represents an increase of more than $3 trillion over the last 10 years.

Even more alarming, around half of these “investment grade” bonds are just one tier away from being rated as “junk.”

Between now and 2021, an unprecedented spike in outstanding commercial debt comes due. That could be a disaster, especially if credit spreads widen and/or interest rates go up across the board. 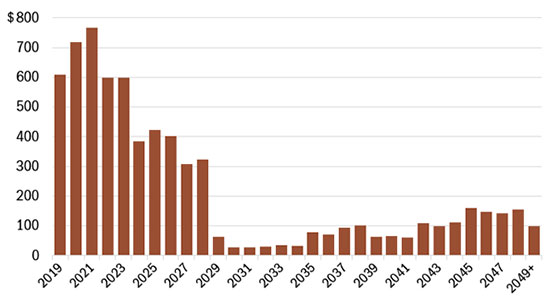 Another potential bubble unwinding to come is in stock market index funds. Passively managed index funds have grown from 4.5% of total U.S. stock market assets in 2002 to 17% in 2018.

The late John Bogle, founder of Vanguard and index investing pioneer, turned skeptical on the outsized growth of index funds prior to his death. Perhaps these vehicles had become “too successful for its own good,” he said.

The fundamental problem is that index funds assume an underlying efficient market where securities analysis and market discovery takes place.

When the largest shareholders of all the blue-chip stocks are index funds, valuations can get distorted.

The share prices of bad companies can get artificially propped up during bull markets. And during bear markets, when scared investors are selling index funds, solid companies can be unfairly marked down.

High-frequency program trading has come to dominate “stock picking” – and when the algorithms turn bearish on market trends, they can all follow each other in triggering cascading sell orders.

The next stock market crash could initially bring down all markets, including commodities. But any threat of deflation will trigger a massive inflationary response from the Federal Reserve.

Inflationary assets such as precious metals stand to benefit. Gold in particular will also tend attract safe-haven demand and hold up better than risk assets when the “everything bubble” bursts.