Calls for the annexation of the Occupied West Bank are gaining momentum in both Tel Aviv and Washington. But Israel and its American allies should be careful what they wish for. Annexing the Occupied Palestinian Territories will only reinforce the current rethink of the Palestinian strategy, as opposed to solving Israel’s self-induced problems.

Encouraged by the Donald Trump administration’s decision to move the US Embassy from Tel Aviv to Jerusalem, Israeli government officials feel that the time for annexing the entirety of the West Bank is now.

In fact, “there is no better time than now” was the exact phrase used by former Israeli Justice Minister, Ayelet Shaked, as she promoted annexation at a recent New York conference.

Certainly, it is election season in Israel again, as Israeli Prime Minister, Benjamin Netanyahu, failed to form a government following the last elections in April. So much saber-rattling happens during such political campaigns, as candidates talk tough in the name of ‘security’, fighting terrorism, and so on.

But Shaked’s comments cannot be dismissed as fleeting election kerfuffle. They represent so much more if understood within the larger political context.

Indeed, since Trump’s advent to the White House, Israel has never – and I mean, never – had it so easy. It is as if the rightwing government’s most radical agenda became a wish list for Israel’s allies in Washington. This list includes the US recognition of Israel’s illegal annexation of Occupied Palestinian East Jerusalem, of the Occupied Syrian Golan Heights, and the dismissal of the Palestinian refugees’ right of return altogether.

But that is not all. Statements made by influential US officials indicate an initial interest in the outright annexation of the Occupied West Bank or, at least, large parts of it. The latest of such calls were made by US ambassador to Israel, David Friedman.

“Israel has the right to retain some  … of the West Bank,” Friedman said in an interview, cited in the New York Times on June 8. Pompeo and Friedman next to the dedication plaque at the U.S. embassy in Jerusalem, March 21, 2019. Jim Young | AP

Friedman is deeply involved in the so-called ‘Deal of the Century’, a political gambit championed mostly by Trump’s top advisor and son-in-law, Jared Kushner. The apparent idea behind this ‘deal’ is to dismiss the core demands of the Palestinians while reassuring Israel regarding its quest for a demographic majority and ‘security’ concerns.

Other US officials behind Washington’s efforts on behalf of Israel include US Special Envoy to the Middle East, Jason Greenblatt, and former US Ambassador to the UN, Nicki Haley. In a recent interview with the Israeli rightwing newspaper, Israel Hayom, Haley said that the Israeli government “should not be worried” regarding the yet-to-be fully revealed details of the ‘Deal of the Century.’

Knowing Haley’s love-affair with – and brazen defense of – Israel at the United Nations, it should not be too difficult to fathom the subtle and obvious meaning of her words.

This is why Shaked’s call for the annexation of the West Bank cannot be dismissed as typical election season talk.

But can Israel annex the West Bank?

More than a pipedream?

Practically speaking, yes, it can. True, it would be a flagrant violation of international law, but such a notion has never irked Israel, nor stopped it from annexing Palestinian or Arab territories. For example, it occupied East Jerusalem and the Golan Heights in 1980 and 1981 respectively.

Moreover, the political mood in Israel is increasingly receptive to such a step. A poll conducted by the Israeli newspaper, Haaretz, last March revealed that 42% of Israelis back West Bank annexation. This number is expected to rise in the following months as Israel continues to move to the right. 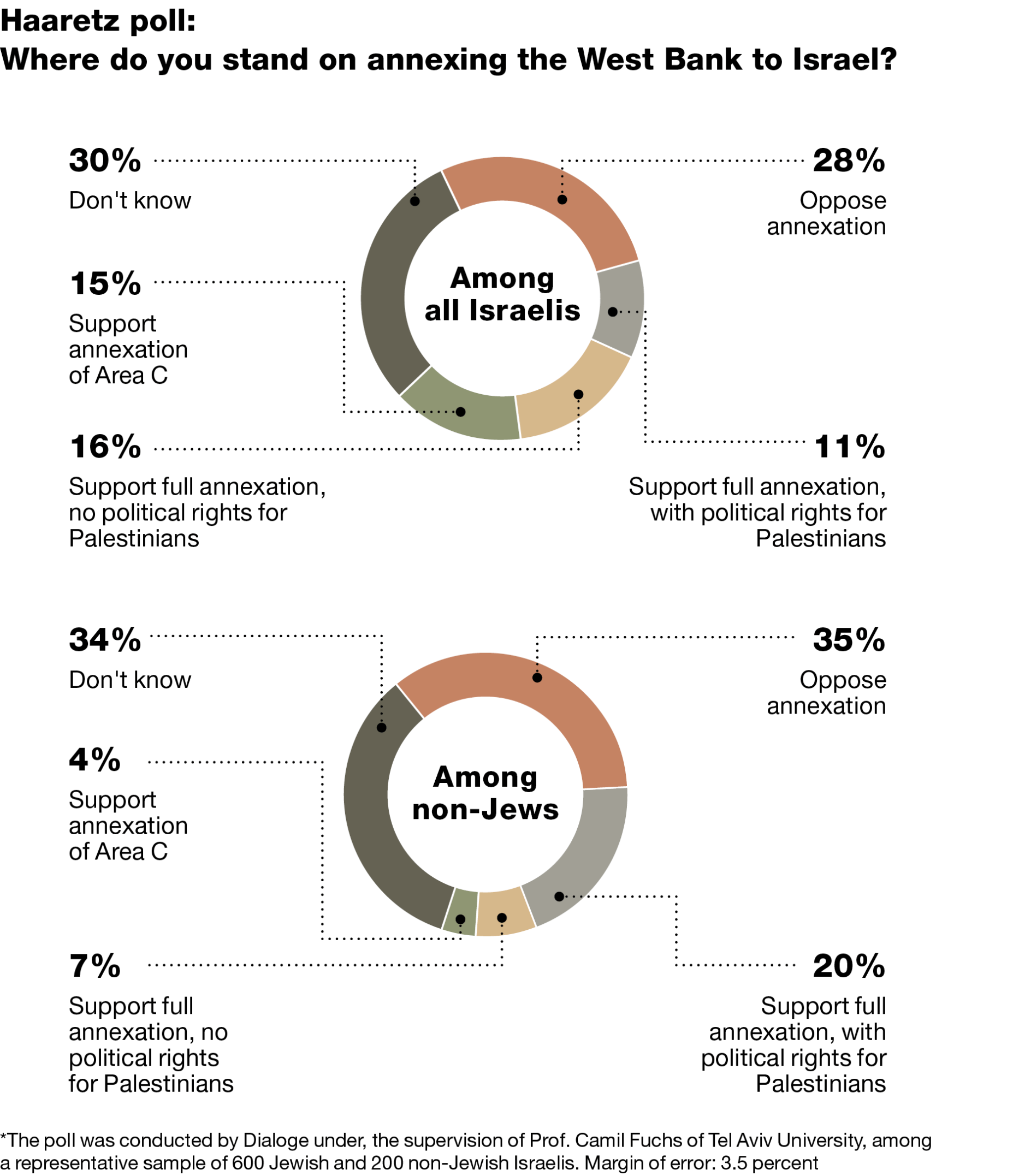 It is also important to note that several steps have already been taken in that direction, including the Israeli Knesset’s (parliament) decision to apply the same civil laws to illegal Jewish settlers in the West Bank as to those living in Israel.

But that is where Israel faces its greatest dilemma.

According to a joint poll conducted by Tel Aviv University and the Palestinian Center for Policy and Survey Research in August 2018, over 50% of Palestinians realize that a so-called two-state solution is no longer tenable. Moreover, a growing number of Palestinians also believe that co-existence in a single state, where Israeli Jews and Palestinian Arabs (Muslims and Christians, alike) live side by side, is the only possible formula for a better future.

The dichotomy for Israeli officials, who are keen on maintaining Jewish demographic majority and the marginalization of Palestinian rights, is that they no longer have good options.

First, they understand that the indefinite occupation of Palestinian territories cannot be sustained. Ongoing Palestinian resistance at home, and the rise of the Boycott, Divestment and Sanctions (BDS) Movement abroad is challenging Israel’s very political legitimacy across the world.

Second, they must also be aware of the fact that, from an Israeli Jewish leaders’ point of view, annexing the West Bank, along with millions of Palestinians, will multiply the very ‘demographic threat’ that they have been dreading for many years.

Third, the ethnic cleansing of whole Palestinian communities – the so-called ‘transfer’ option – as Israel has done upon its founding in 1948, and again, in 1967, is no longer possible. Neither will Arab countries open their borders for Israel’s convenient genocides, nor will Palestinians leave, however high the price. The fact that Gazans remained put, despite years of siege and brutal wars, is a case in point.

Political grandstanding aside, Israeli leaders understand that they are no longer in the driver’s seat and, despite their military and political advantage over Palestinians, it is becoming clear that firepower and Washington’s blind support are no longer enough to determine the future of the Palestinian people.

It is also clear that the Palestinian people are not, and never were, passive actors in their own fate. If Israel maintains its 52-year old Occupation, Palestinians will continue to resist. That resistance will not be weakened, or quelled, by any decision to annex the West Bank, in part or in full, the same way that Palestinian resistance in Jerusalem did not cease since its illegal annexation by Tel Aviv four decades ago.

Finally, the illegal annexation of the West Bank can only contribute to the irreversible awareness among Palestinians that their fight for freedom, human rights, justice and equality can be better served through a civil rights struggle within the borders of one single democratic state.

In her blind arrogance, Shaked and her rightwing ilk are only accelerating the demise of Israel as an ethnic, racist state, while opening up the stage for better possibilities than perpetual violence and apartheid.

The post The Day After: What Happens If Israel Annexes the West Bank? appeared first on MintPress News.