Socialist Venezuela’s economic collapse and hyperinflationary spiral serves as a warning for American investors. It’s what can happen when a government spends perpetually beyond its means and refuses to face reality.

Despite a U.S. economy that appears relatively strong and stable on the surface, its foundation is beginning to crack under the pressure of a $22 trillion (and growing) debt load.

Both Republicans and Democrats are to blame for that. But rising pro-socialist sentiment within the Democrat Party could turn our current debt danger into a clear and present disaster.

We are potentially just one election away from heading down a road to economic ruin – one that could bring about a Third World-style hyperinflation in the United States.

In his State of the Union Address last week, President Donald Trump specifically warned Americans of the dangers of socialism. He noted that it is gaining traction within some quarters of American politics.

He concluded, “Tonight, we renew our resolve that America will never be a socialist country.”

Tellingly, many Democrats refused to applaud in approval.

Cortez, Sanders, Markey, and 2020 presidential hopefuls including Cory Booker are pushing what they call a “Green New Deal.”

This radical proposal would be the biggest expansion of government size and power in history.

It would impose draconian, economically crippling restrictions on industry and transportation while authorizing trillions of dollars in new spending on everything from windmill farms, to universal college, to universal healthcare, to reparations for historically aggrieved groups, to “economic security” handouts to people who are “unable or unwilling to work.”

“The Green New Deal Would Spend the U.S. Into Oblivion,” blared a Bloomberg headline.

The article warned of “unrealistic and ruinously expensive economic proposals” contained in the Green New Deal. It would “take every big spending idea that has emerged on the political left in recent years and combine them into one large package deal, with little notion of how to pay for them all.”

The Green New Deal would plunge the United States into full-fledged socialism. If a champion of it like Cory Booker somehow wins the White House in 2020 and Republicans lose the Senate, there may be no stopping America’s march toward economic oblivion.

A currency crisis of some magnitude (which may or may not reach the level of hyperinflation) appears to be inevitable even under favorable assumptions about our political and economic future.

The Congressional Budget Office (CBO), in its recent report “The Budget and Economic Outlook: 2019 to 2029,” projects an unprecedented surge in the size of the national debt relative to the economy. 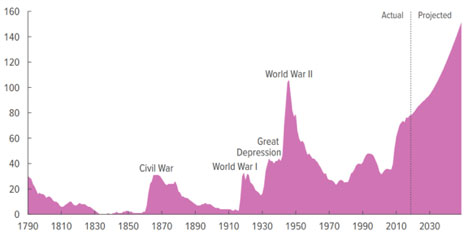 And if a black swan event were to hit on the scale of a world war, the debt could hyperinflate – requiring a hyperinflation of the currency to service it.

As the CBO acknowledges in its report, “High and rising federal debt would reduce national saving and income, boost the government’s interest payments, limit lawmakers’ ability to respond to unforeseen events, and increase the likelihood of a fiscal crisis.”

All previous surges in debt, triggered by wars or economic crises, were unexpected and temporary in nature. The debt surge we now are in the midst of is chronic in nature – the result of decades of fiscally irresponsible policies.

It could have been avoided – and would have if politicians had been subject to the constraints of a sound money standard (gold and silver) all these years.

As Larry Parks of the Foundation of the Advancement of Monetary Education said in a recent Money Metals podcast interview, “With paper money there is no limit to how much money you can spend.

Gold is an essential asset for investors to own as protection against a currency debasement and possible hyperinflation. Silver, though, may be more the practical precious metal to have on hand if a wrecked economy degenerates into black market and barter transactions.

In hyperinflationary Venezuela, locals treat the official currency, the bolivar, like toilet paper. As it depreciates by the hour, they eagerly swap bolivars out for more stable foreign currencies or alternative underground currencies including gold, silver, and cryptocurrencies.

Surviving hyperinflation requires flexibility and adaptability. It will impoverish those who rely on conventional sources of income and savings.

You won’t necessarily get rich by owning precious metals, even as their prices shoot up in nominal terms. But you will preserve your purchasing power over time, regardless of how many trillions or quadrillions the government adds to the national debt.