CARACAS, VENEZUELA — The international outrage generated by images of U.S.-donated “humanitarian” aid on fire at a Colombian-Venezuelan border crossing last month inspired a frenzied call for Venezuelan regime change from top U.S. politicians and media outlets once the blaze was promptly blamed on the Venezuelan government led by President Nicolás Maduro.

Many independent journalists and non-mainstream outlets had been more skeptical, while still others provided video evidence that — in fact — Venezuelan opposition protesters, not the Venezuelan military, had been responsible for the fires. Yet, this evidence was ignored by the corporate media, and those opposing the official narrative became “Maduro apologists” in a narrative all too familiar to those who remember previous U.S.-led regime-change efforts abroad.

Now, several weeks later, the narrative has suddenly reversed, following a New York Times investigation that revealed that the fire that consumed the aid trucks had indeed been caused “accidentally” by members of the Venezuelan opposition. The Times published on Sunday a report that corroborates earlier reports from independent journalists that a Molotov cocktail thrown by a supporter of the U.S.-backed and -funded opposition was ultimately responsible for the blaze.

The Times report cited “unpublished footage” as well as footage that had been previously released by the Colombian government. The report notes that, half a minute before the first truck caught fire, “a homemade bomb made from a bottle is hurled toward the police…the rag used to light the Molotov cocktail separates from the bottle, flying toward the aid truck instead.” The Times then notes that “the same protester can be seen 20 minutes earlier, in a different video, hitting another truck with a Molotov cocktail, without setting it on fire.”

It is unclear exactly why the Times decided to publish this story now, given that footage available over two weeks ago shows the Molotov cocktails being thrown at the aid trucks and the burning rag landing atop one of them. However, the Times’ report is a rare example of a mainstream U.S. outlet challenging the official narrative about a government currently being targeted by Washington for regime change.

Despite the fact that claims that Maduro was responsible for the incident have been debunked by the country’s “paper of record,” the U.S. government has declined to walk back from the narrative entirely, though it has notably struck a more “cautious” tone.

One U.S. government statement cited by the Times read: “Eyewitness accounts indicate that the fire started when Maduro’s forces violently blocked the entry of humanitarian assistance.” Then, Garrett Marquis, a spokesman for the National Security Council said:

Maduro is responsible for creating the conditions for violence… His thugs denied the entry of tons of food and medicine, while thousands of courageous volunteers sought to safeguard and deliver aid to Venezuelan families.”

The Times notably accords these statements considerable credibility, despite the fact that the core claim of the article — that the Venezuelan opposition was responsible for the fire — should greatly reduce their credibility regarding this incident. For instance, after Marquis stated that “Maduro is responsible for creating the conditions of violence,” the Times wrote that “the aid shipment created a showdown unlike any on the border between Colombia and Venezuela in years” and proceeded to bolster Marquis’ claims that Maduro was responsible for the border showdown. 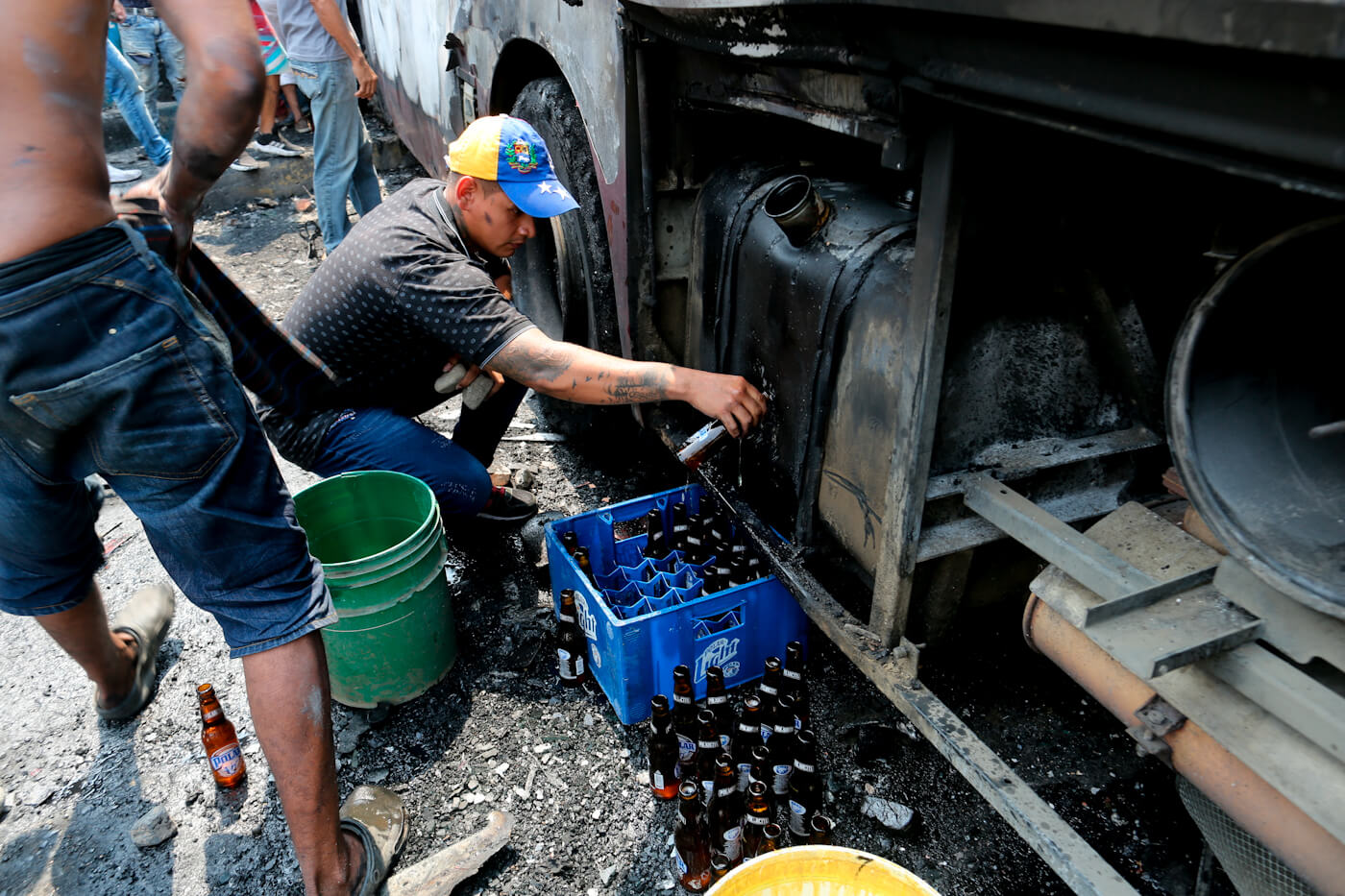 There was no mention of the fact that Elliott Abrams, the U.S. envoy for Venezuela, has a history of hiding weapons in humanitarian aid shipments, nor of the fact that the U.S.’ role in the border showdown had been condemned by the Red Cross and the United Nations for “politicizing” humanitarian aid. The story also failed to note reporting by RT’s Dan Cohen, who was told by a Colombian government-affiliated priest that the showdown was “designed to induce regime change” and create “a violent clash inside Venezuela.”

Furthermore, the Times also — shockingly — lends credibility to some of those present who were hurling Molotov cocktails at Venezuelan security forces. The Times writes that “protesters who threw Molotov cocktails from the bridge insisted that Mr. Maduro’s forces, not their homemade bombs, set the fire,” and uncritically offers testimony from violent protesters, one of whom the paper casually introduces as “another bomb thrower.”

In addition, the Times entertained claims made by Gaby Arellano, a spokeswoman for the U.S.-backed Venezuelan “president,” Juan Guaidó, who asserted that tear gas canisters thrown by Venezuelan forces were to blame for the fire, despite the fact that tear gas is not incendiary, unlike Molotov cocktails. The Times article ends with a quote from Arellano, stating that the proof that Maduro’s government is responsible is that “it was all recorded live by the media. There’s even videos where you can see it all happening,” even though the ostensible crux of the story is that those very videos show the opposition to have been responsible.

The ultimate power of MSM gatekeepers

It seems likely that the Times gave so much attention to these statements and counter-narratives to prevent itself from straying too far from the official narrative, even to the point that it calls the core thesis of its own report into question. Indeed, the Times has long been a cheerleader of past government lies that were used to manufacture consent for war, including the “weapons of mass destruction” lie that led to the Iraq War. Thus, this latest report is refreshing in the sense that the Times was willing to challenge the prevailing narrative, even if it sought to weaken that challenge as its report went on.

Yet, the Times report also shows the power of such top media outlets in controlling the narrative. While independent outlets have made headway in challenging government narratives, such outlets are often maligned by influential mainstream outlets for reports that question the official story. Yet, as was the case here, when a newspaper like the Times later corroborates those independent reports, it becomes an accepted fact and the narrative changes. If anything, this particular incident shows not only the importance of independent media outlets but the continued role of the top media outlets in determining the course of public opinion, particularly in regard to Washington-brokered regime-change operations abroad.