A new series of video interviews highlights the perspectives and struggles of women involved in human rights activism in Vietnam.

The 88 Project, an organisation supporting freedom of expression in Vietnam, released the first video of an ongoing interview series with female activists in Vietnam. In the first interview with Pham Doan Trang, a dissident journalist and political activist, she discusses the challenges women face as bloggers and human rights activists:

In general, Vietnamese women are not respected. Not only in democracy activism but in all fields. In democracy activism, female activists are disadvantaged because they get attacked no less than male activists. They get beaten and assaulted. The work they do is no less than their male counterparts. But what they often get from other people is pity. I think it is not respect.

She also recounts an incident of police brutality which led to permanent injury to both of her legs.

During a demonstration to protect trees and the environment in Ha Noi, they attacked me and broke both of my legs.

Tran Thi Nga’s attack was documented and posted on YouTube with recordings of her being wheeled into a hospital accompanied by her two young children.

According to family reports, Tran Thi Nga has been subjected to both physical and psychological harassment after her arrest, receiving death threats and beatings from a cellmate. 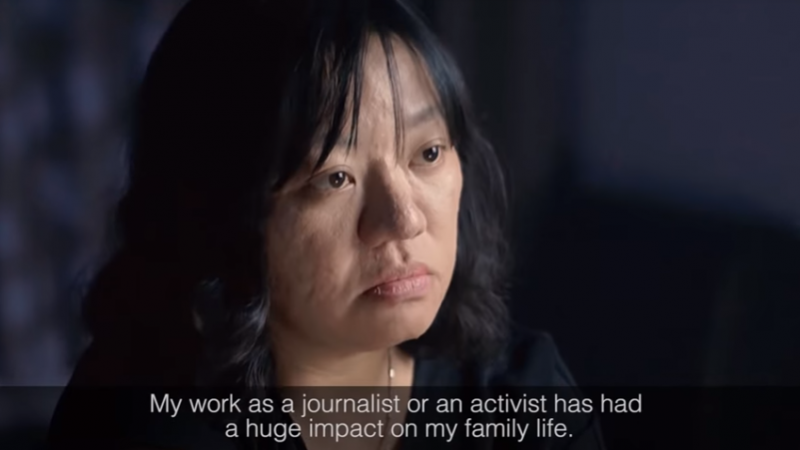 Screenshot from video “Full interview Doan Trang” uploaded on 10 May 2019, by the 88 Project on YouTube

Despite the challenges faced by female human rights defenders both in and out of prison, Pham Doan Trang says that there may be a higher purpose when women are involved in political activism.

In a dictatorship nobody has freedom, but especially for women, their lack of freedom is multiplied many times compared to men. Because women are not only victims of the regime in terms of politics, but they are also victims of gender inequality and self-constraint. Women restrain themselves in thinking that they are not suitable for a political career. That politics are for men.

We should think that our fight is not only against dictatorship or to free Vietnam from a dictatorship. It is also a fight to free ourselves from the ideological constraints from the prejudice that we impose on ourselves until today.

According to the 88 Project database, there are currently more than 200 prisoners of conscience in Vietnam with over 30 identifying as female.

Bloggers and journalists are frequently arrested and charged for “activities attempting to overthrow the state” or “conducting propaganda against the state”. According to Amnesty International, the Vietnamese government has been conducting a growing crackdown on freedom of expression and peaceful activism over the past few years.

Nguyen Dang Minh Man, a photojournalist and the woman who has served the longest time in prison so far, is expected to be released at the beginning of August.

If women have freedom, they can develop themselves profoundly, and they will see that life is so beautiful, that there are many options, many opportunities, many things they can do, discover and develop, to contribute to the development of society and humanity.

Don Le is the Internet Freedom Program Manager for Viet Tan, advocating for digital rights and supporting bloggers and citizen journalists in Vietnam.

Top image: Screenshot from video ‘Full interview Doan Trang’ uploaded on 10 May 2019 by the 88 Project on Youtube.