Two years ago at a conference during which I both presented and attended, a Keynote speaker, Rich Dad Robert Kiyosaki, introduced me to a different way of looking at things. He posed the question, “How many sides does a coin have?”

The correct answer is “three.” The front (obverse), back (reverse) and… the edge!

When you think about it, this makes sense. From this angle – uncommon to most observers – a person can begin to look more deeply at a given subject. From the edge, you are able by definition, to see “both sides” of the story.

Using Rich Dad’s perspective as a research tool helps define and validate the premise of this essay… that the price action right now of gold – and soon silver – are giving us important clues about the direction, strength, and durability of the next price trend.

It’s easy and understandable for Norteamericanos to become fixated on the price of gold and silver, expressed in their domestic currency, the U.S. dollar.

But once in a while, it’s important to take a step back and gauge how much people in OTHER countries are paying in their currency when they exchange fiat for some of the honest money that gold and silver have historically represented.

When gold is in an uptrend against other currencies it lets you know that something is going on under the hood that most people are missing. 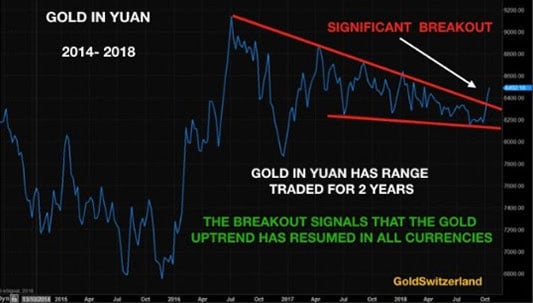 When precious metals buying in these countries continues to increase in spite of the fact that it has become even more expensive to do so, Mr. Market is letting you in on just one more reason why you should pay attention … and either start “stacking” or add to your current insurance/investment position. 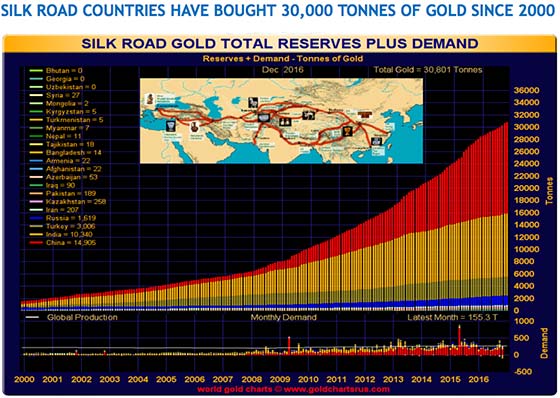 The Trend is Your Friend

Increased gold purchases by “Silk Road” countries – for going on two decades – have continued unabated in spite of periodic currency devaluations and loss of purchasing power to the U.S. dollar. Not to mention that China, which used to export millions of ounces of silver annually, has for some years, not only been keeping all of its internal production, but importing more!

The Shanghai Gold Exchange (SGE) chart demonstrates that this trend shows no signs of letting up.

Going forward, plan on gold being more challenging to find, and due to increased regulation along with overall country risk, more complicated, costly and time-consuming to produce. And, not to mention, more expensive to buy as mushrooming demand across the globe kicks in and continues with a vengeance.

Goldcorp was recently bought out by Newmont Mining, creating the world’s largest producer. This is the second recent gold company mega-merger – with others almost certainly to follow – indicating the need these operators have for nailing down future ore bodies, as every ounce they produce depletes their reserves. 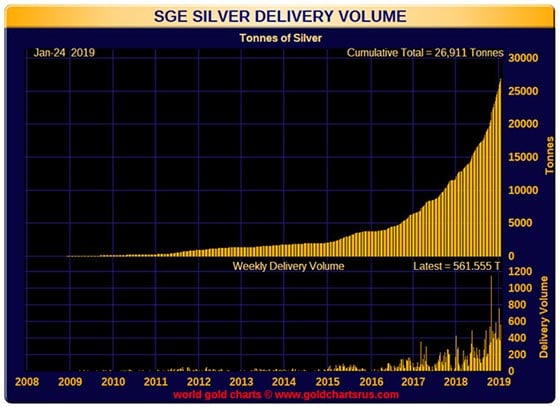 After a brief time lag, when gold experiences a sustained and robust rise price rise, so does silver.

The directional correlation between gold and silver is close to 90%. When you observe the statistical rarity of a gold/silver ratio above 80:1 – which happens to be where we are right now – a “reversion to the mean” is in the offing.

Central Bank Gold Holdings Reveal What “The Man” Is Doing

Even as the new gold secular bull run got underway in 2000, central banks continued to sell gold for nine more years.

However, in 2010 that trend reversed and has continued upward through the present day. From 2015 through the end of 2018, central bank buying has noticeably accelerated.

One writer has referred to central banks as “one trick ponies with printing presses.”

But even as they push out more paper promises, these tricksters continue to covet the Midas metal. Former Federal Reserve Chairman, Ben Bernanke, pressed to answer why they still held gold, replied curtly, “because of tradition.”

We’d say there’s more to it than his brief reply – a lot more.

Way back in 2002, David Morgan made the following comment:

For the record, I will state, there will be another, more frenzied, scramble that will carry silver prices to highs that will repair all the excess paper money creation, price suppression, supply deficit, and bearish sentiment over the past two decades. This will become known as the Great Silver Crisis.

Gold, silver and the mining stocks are finally awakening from an eight-year slumber.

While no one can predict just how far and how fast prices will rise, the odds of missing out for those who continue to look the other way or who hesitate to act, will parallel the metals’ upside trajectory.

Then at some point, as surely as the sun rises each morning, many of these same people will decide to step up to the plate and start buying at much higher prices. They will be driven – not by calm, calculated decision-making, but rather by FOMO – the fear of missing out.

Do yourself a favor. Behave like “Rich Dad.” Get up on “the edge of the coin” and take a look at both sides.

Then start “vaulting” gold and silver on a regular basis, while availability is good, and the price is still reasonable.