The Liberty Documentary has reached Phase 3 “Post-Production“. The Post-Production team is seeking donations and funding to finish this very anticipated film release to the public. Donate today using one of the methods listed below.

↓ Donation Forms at the Bottom of This Page! ↓

Liberty is a documentary film exploring Minarchism, Voluntaryism, 3rd Party politics, and Statism in the United States. There is no better time for a documentary film that explores the notion of “liberty”, what it has meant for the development of the current political climate, and how the re-embracing of its ideals can positively affect all Americans, regardless of political affiliation. Through interviews and b-roll collected during a road-trip style production, the filmmakers will explore libertarianism in its varied forms, uncover the schisms that divide its current adherents, and positively influence the future of the movement by unifying its constituents through a common alliance under its core principles.

WHAT IS LIBERTY?
“FREEDOM; EXEMPTION FROM EXTRANEOUS CONTROL. THE POWER OF THE WILL, IN ITS MORAL FREEDOM, TO FOLLOW THE DICTATES OF ITS UNRESTRICTED CHOICE, AND TO DIRECT THE EXTERNAL ACTS OF THE INDIVIDUAL WITHOUT RESTRAINT, COERCION, OR CONTROL FROM OTHER PERSONS.”

Liberty is the precept upon which the colonial forefathers founded this country, fighting against the tyranny and rule of the British monarchy, sacrificing their very lives in order to give all future generations a place to live free and prosper. Many ideologies which uphold liberty as a fundamental value also adhere to a philosophy known as the Non-Aggression Axiom (also called the ”Non-Aggression Principle” or NAP). NAP is the idea that each person has the right to make his or her own choices in life so long as they do not involve aggression – which is defined as the initiation of force or fraud against others. It is considered by many to be the cornerstone principle of libertarianism. Thus, liberty can be defined simply as the freedom to make choices, to live our lives in the way that we feel is right -for ourselves, for our families, and for our nation.

The liberty community has stood together and maintained the idea that all individuals deserve the freedom to choose their own path in life. Today, however, the liberty movement is a fragmented mess. Amid relentless infighting and the self-imposed isolation of closed off philosophies, we have forgotten what we all have in common: the desire to live free. This film will serve as a platform to expand the call to unification through liberty in today’s increasingly apathetic age, and bring momentum back to a stagnating movement.

Liberty will examine what some of the most prominent minds within the liberty movement are doing to reinvigorate the cause and to finally ensure “liberty, and justice for all”.

Liberty will consist of three chapters covering the history and future of the liberty movement.

Chapter One: The Past

Some might say the movement has never been as closely knit as it was during Ron Paul’s run for the presidency during the campaigns of 2008 & 2012. Liberty will revisit some of the defining moments of the revolution, and the aftermath. We will be exploring some of the dirty tricks that were used to try to derail the liberty movement, the media blackouts, censorship, and so on… We will also examine some of the groups and the leaders from within liberty-minded organizations, and those who were influenced by them, will expound upon their contributions to liberty and where they are now. We will examine how their views may have changed, what they learned from the experience, and how it has affected their struggle to further the cause of liberty over the past few decades.

The liberty movement has fragmented into dozens of factions, often at war with one another over the petty details which define their specific ideologies. Many within the movement have failed not only to spread, but even to maintain the fiery passion for liberty. Liberty will explore the stagnation within the movement and the many different pockets of identity it currently consists of. It will help bridge the gap of understanding between people who may not be familiar with these philosophies, their adherents, or even their existence. Above all, Liberty will serve as a reminder that the core values of all these myriad factions all have one thing in common: they are all based on the mutual foundation of Liberty. This film will remind them that they have more in common than they have differences. They all share the same enemy: tyrants, and those who would use coercion to satisfy their desires, justifying their crimes with unjust laws, and trampling on the natural rights that all humanity has been gifted with by the simple act of being born.

Many have thrown in the towel on trying to change “the system” through playing by its rules -rejecting politics, campaigns, and even voting. They have transferred the energies once directed towards the political playing field toward strategies such as self-reliance, self-governance, and self-sustainability. However, the most hardcore Anarcho-capitalists, Agorists, OathKeepers, Anonymous members (and their supporters), Occupy Movement attendees, Military Veterans, liberty-loving statists, and liberty-loving anarchists can all find a common ground in the one love they share: liberty. Can they be united once more? help us find the solutions, strategies, and alternatives that are needed now more than ever. In the final chapter of the film we will examine what some of the most prominent minds within the liberty movement have done, are now doing, and are planning to do to further the cause. This documentary will create a general consensus of where the future of the movement is headed, but more than that: Liberty will provide a clear path towards a bright and hopeful future where the spark of freedom can blaze within us all and ignite a fire of change that will spread across the nation to finally ensure “liberty, and justice for all”.

THE LONG AND WINDING ROAD (HOW TO PRODUCE A SUCCESSFUL DOCUMENTARY)

There are three things vital for any documentary to be considered a success: a topic relevant to the market, high production values, and – most importantly – a built-in audience. Liberty, by design, has all three.

With the 2016 election cycle now behind us, there is no better time for a hard-hitting political documentary exploring topics that the mainstream news networks consistently ignore. Reminding people of the noble fights of the past, while offering solutions for the future, Liberty will appeal to the curious Republican/Democrat whose party ignores many of the issues they may deem most important. It will appeal to those who are seeking to expand their knowledge of American policy, learning from history so as not to repeat it. It will appeal to the liberty-minded individual unsure of how to proceed in these turbulent times.

Film is primarily a visual medium, thus it is of vital importance to meet the standards of quality that over a century of film viewing has instilled in the movie-watching public. With state of the art equipment and a team experienced in utilizing its capacity to create atmospheric and emotional content, Liberty will not only be informing and inspiring, but it will be beautiful to watch as well. And with the talent of Jordan Page behind the music, the soundtrack will deliver an auditory experience that will fully immerse the audience in the journey

Without an audience eager to view the finished product, there is no chance for a film to change lives or make money. Fortunately, Liberty, by its very nature, has a built-in audience of millions. While Libertarian and other third party candidates only received a small percentage of the popular vote in 2012, that number still stands in the millions. Since then, many more have become interested in Libertarian ideals. In fact, many of the topics that were first introduced to the political arena by Ron Paul have since become mainstream topics of conversation. Ideas such as ending the war on drugs, auditing (or even ending) the Federal Reserve, and addressing the corruption that comes with corporate influence have been addressed by major candidates from all of America’s major parties. With Liberty addressing all of these issues and more, it has the rare ability, in a political film, to cross political barriers, reaching individuals spread throughout the ideological spectrum, and engage audiences of all affiliations.

Filming of Liberty is tentatively scheduled to commence during the summer of 2018. After principal photography has wrapped, the post-production phase will take place in Las Vegas, NV. During this phase, the director and producer will supervise the final editing process, secure any necessary archival footage, score the film and mix audio, add titles and optical effects, and ultimately produce a digital master for delivery to backers -and distributors worldwide.

As with any film project, the primary risk is that we don’t get funding sufficient to cover our expenses. However, with the minimum goal set for our campaign, all production expenses will be covered. Thus, our main risk will be abated upon successful completion of our campaign. Additional risks are entailed whenever extensive travel is a part of a film production, but with insurance and contingencies built into the budget, the risk is minimized.Finally, there is a risk of being able to complete the post-production in a timely manner. That is why we have included post-production costs in our stretch goals. If these goals are not met during this campaign, we will launch another fundraising campaign -provided sufficient funds have not been raised during production. Should this prove to be unfruitful, the filmmakers are dedicated to complete the film at all costs, however volunteering weekends may stretch the post-production out for many additional months.

Donate Bitcoin to this address

Donate Ethereum to this address

Donate Bitcoin cash to this address

Donate Litecoin to this address

Donate Dash to this address

Donate Verge to this address

Donate Zcash to this address 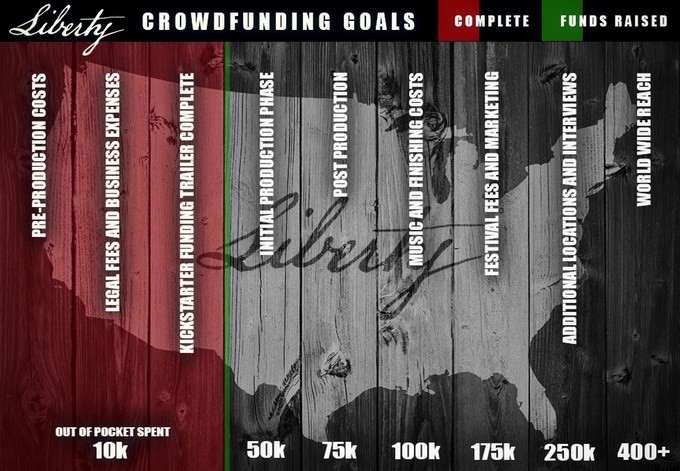 PLEASE, JOIN US ON THE JOURNEY!