America’s fear of mass shootings is about to take a truly bizarre turn. That’s because our law enforcement will soon be used as fortune tellers to spy on future criminals.

How will law enforcement be used as fortune tellers?

A recent Albuquerque Journal article revealed that law enforcement will flag people who they think might pose a potential risk.

Gov. Michelle Lujan Grisham directed state Homeland Security and Emergency Management Secretary Jackie Lindsay to start enrolling all 33 county sheriffs in a data-sharing program so that individuals deemed a potential risk could be flagged and monitored.

What types of things could Americans do that law enforcement would consider threatening?

Inside Sources revealed that police would be looking for “certain indicators.”

I think it’s obviously important for all of the citizens of New Mexico to be on the lookout for certain indicators of these types of folks that would do this.  And part of our job as government officials is to ensure that the citizens of the community understand what those indicators are so they can report them.

The Tampa Bay Times reports that police are looking for “certain critical threat indicators” on students’ social media posts, and has even created their own FortifyFL app that allows anyone to secretly report suspicious behavior.

What these “indicators” are is anyone’s guess.

Johnson also said that it was “important for law enforcement and other social services to follow up” on reports of possibly dangerous citizens “in the hopes of preventing” acts of domestic terrorism.

Law enforcement and other agencies are being encouraged to report on and flag anyone who they deem a “potential risk.”

What could possibly go wrong?

It was only a couple of months ago, when I warned people about the “Threat Assessment, Prevention and Safety Act” that basically allows law enforcement to label anyone a potential threat.

The TAPS Act would encourage law enforcement to give everyone a personal threat assessment (kids and adults) and single out those that they deem as future threats.

Police across the country are already using “red flag” laws to take weapons away from people they deem a potential threat. So why is Homeland Security creating a whole new class of suspicious people?

Because the War on Terror constantly needs new enemies if it is to keep Americans living in fear.

“Sheriffs had been working with the Democratic sponsor of a proposed red flag bill toward a possible compromise. In its original form, the bill would have allowed courts to order the temporary taking of guns from someone deemed an immediate threat,” San Juan County Sheriff Shane Ferrari said.

From Homeland Security spying on everyone’s social media posts to the FBI, it seems like no one is safe from Big Brother’s prying eyes.

Reason.com warned that the FBI’s “red flag” social media spying tool is “a meme-illiterate Facebook-stalking precog from the Minority Report.”

Reason also warned that spying on everyone’s social media posts could spiral out of control.

There are operations centers and watch floors, which monitor news and events to create reports for the relevant FBI team. These would spur the activation of fusion center, tactical teams which use early notification and accurate geo-locations. Which could allow law enforcement to target and even disenfranchise social media users whose posts may have been misinterpreted.

Placing people on a secret risk chart is a disaster waiting to happen; just ask those people on the no-fly list or terror watch list.

There are no law enforcement risk rating charts yet.

Based on DHS’s old risk advisory chart we could expect law enforcement to use something similar to Canada’s workplace risk assessment ratings chart: 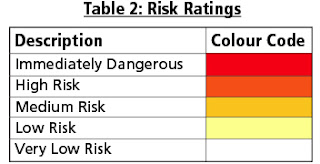 Asking law enforcement to guess who might become a criminal is at best fortune telling; and at worst it is an excuse to incarcerate more people.