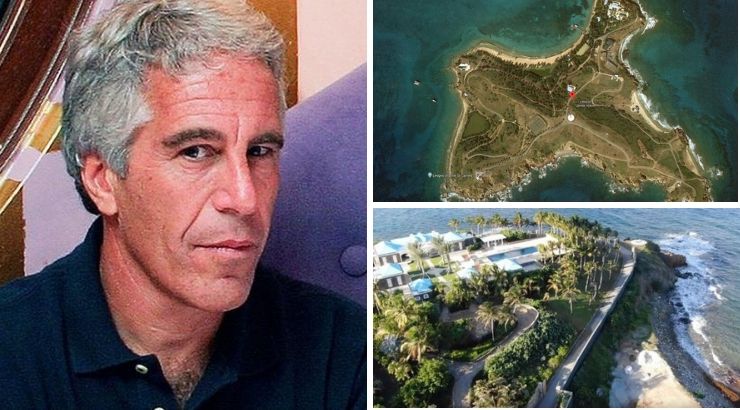 (ZH) — With all eyes on Jeffrey Epstein following his Saturday arrest on charges of underage sex-trafficking, we now turn our attention to the mysterious island owned by the pedophile financier. The ‘temple’ in better days: Epstein purchased the island for $7.95 million in 1998 – visiting the island up to three times a month for a few days at a time up until his 2008 ‘sweetheart’ deal for 13 months in prison with partial work-release, brokered by now-fired (‘resigned’) Labor Secretary Alexander Acosta. Back in his heyday, before his 2008 guilty plea in Florida, Epstein would visit his piece of the Virgin Islands archipelago about two or three times a month for stays of three or four days, according to the former staffer, who asked not to be named because Epstein insisted on secrecy from his employees. He described it as a Zen-like retreat when Epstein was there, padding around shirtless in shorts and flip-flops, with meditative music piped into the area around the main house, the cabanas and the pool, where women would sometimes sunbathe topless or in the nude. –Bloomberg

Shortly after he purchased the island, Epstein began construction on the 72-acre property, according to Bloomberg – carving roads, planting palm trees, and building a massive stone mansion and a weird temple-like structure which had its gold-colored dome blown off by Hurricane Irma in 2017.

Tourists still take boats out to get a glimpse of the island, where, according to a former employee, Epstein hosted young women who flew into St. Thomas with him and were ferried over in groups aboard a 38-foot vessel called the “Lady Ghislaine,” apparently named for his friend Ghislaine Maxwell. –Bloomberg

Epstein also installed a secret safe in his office, which was off-limits aside from the occasional housekeeper.

The only unusual aspect of the main residence the former worker said he was aware of were the security boxes in two offices. The level of secrecy around a steel safe in Epstein’s office, in particular, suggested it contained much more than just money, he said. Outside of an occasional visit by a housekeeper, no one was allowed in those rooms. –Bloomberg

With the source of Epstein’s wealth a longstanding mystery, and rumors swirling that Epstein may have been backed by a “state sponsor” for a honeypot blackmail operation, the contents of Epstein’s off-limits safe should be of the utmost interest to US prosecutors.