In a very limited sense, there is private education in the developed world, but private schools are almost always heavily regulated by the government. There is also the issue of compulsory attendance laws. Competition in schooling that is unapproved by government bureaucrats is prohibited since attendance does not qualify as actual “education” in the eyes of the government. Therefore, we lack the means to compare an actual free market in education with government schooling.

In underdeveloped nations, however, because societies are much poorer, governments lack the resources to crack down on underground private schools. In his book The Beautiful Tree, James Tooley explored and researched numerous poor countries including India, Nigeria, Ghana, Kenya, and China. He described a recurring theme of government education officials not even being aware of private schools for the poor. Usually, they balked at the idea. Private schooling is generally regarded as a luxury for the rich. In cases where government agents did know of the schools, regulation was rarely enforced. Officials did not always visit schools in poor areas, and when they did, a bribe was enough to get them to leave.

Tooley’s research showed low-cost, private, usually unregulated schooling to be a thriving market in many areas. In Nigeria, for instance, Tooley wrote:

Writing of a visit to India, he commented:

Everywhere among the little stores and workshops were little private schools! I could see handwritten signs pointing to them even here on the edge of the slums.

In rural Gansu, China, Tooley’s team located 586 private schools in the villages. “Officially,” there were only 26 schools in Gansu, all of which were government schools in the larger towns. It was a matter of policy in China to deny these private schools existed. After all, China had already declared that universal public primary school had been achieved. Tooley’s research, therefore, provides unique insight into comparing government schooling with private alternatives.

Teacher absenteeism in government schools is probably the most blatant issue. While visiting a government school in India, Tooley observed 130 students cramped together in one room. The head of the school mentioned that the other teachers were absent that day, so they were teaching them all together. “They’ll be absent every day,” he was told by the deputy district education officer. Transparency International has estimated that government teacher absenteeism in the developing world ranges from 11 to 30 percent. Conversely, Tooley reported that when he visited private schools unannounced, it was rare to find teachers not teaching, and in those instances, the principal had taken over the class for the day. 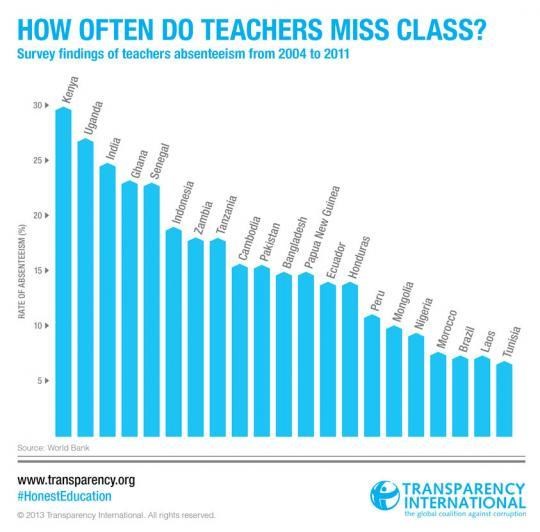 The absence of teachers is not the only problem. In 2003, Kenya introduced free primary education. Many parents who transferred their children from private schools to the new government schools soon reversed their decision. Tooley’s team interviewed parents from four different schools who had tried the government schools. He reported that every parent interviewed commented on how the private schools were of higher quality.

[Public education] may be free, but children do not learn. This makes the quality of the education poor and that is why many parents have brought their children back.

While most of the teachers in government school are just resting and doing their own things, in private school our teachers are very much busy doing their best because they know we pay them by ourselves.

While interviewing mothers in India who sent their children to low-cost private schools, all were very open about why they chose private over government. One mother, when asked about government teachers being well-trained, replied: “They might be very good at studying, but they are not very good at teaching.” Another commented: “They even beat the children very badly, treat them as slaves.” This was, of course, if the teachers showed up.

We pass the public schools many days and see the children outside all of the time, doing nothing. But in the private schools, we see them every day working hard.

Even though these schools serve some of the poorest people on the planet, they still take in enough in fees to be able to stay open. They do so by hiring and personally training teachers who do not demand high wages due to being extensively trained in universities (education of many teachers tends to be at about a high school graduate level). Low-cost schools also invest significantly less in buildings and playgrounds. Though the fees are low enough to be manageable for most parents in poor areas, many of the schools Tooley visited were also providing free education to orphans, as well as families who were exceptionally poor. In some cases, 20 percent of the students were receiving free education.

The studies that Tooley organized in India, Nigeria, Ghana, and China comparing government schools with both private recognized and unrecognized schools confirmed his experiences on the ground interacting with parents and teachers. Below is his summary of the results:

I don’t intend to go over all of the data here, but for a couple of examples, here is the raw data of student scores in Ghana: 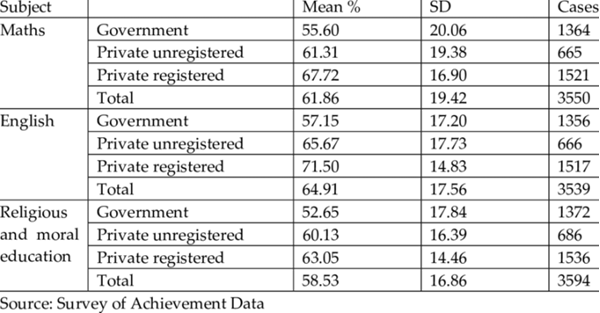 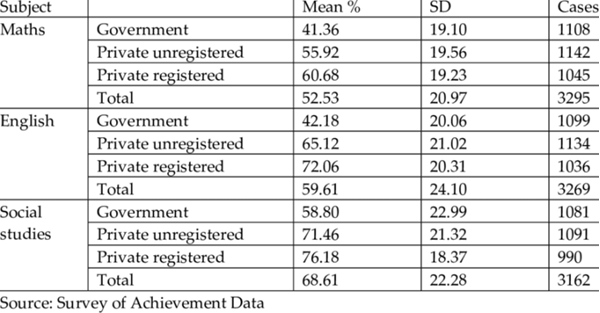 Controlling for the range of background variables, including education and wealth of parents, student’s IQs, and peer-group effects, the differences were usually slightly reduced but generally still large and still favored both types of private schools in each study.

The success of entrepreneurs in developing countries at meeting the demand for education is quite impressive, especially when compared to the failures of the government alternative. The myth that education cannot possibly be provided to the poor through non-governmental means is shattered. In fact, it may be the only effective way for them to receive a quality education. One wonders what could be achieved if educators were completely freed from the threat of regulation, the corruption of government agents, and the crowding out effects from massive subsidization of poorly performing government schooling.

Andrew Kern blogs at The Principle Libertarian. He is a dairy farmer and studies economics, history, and political philosophy in his spare time.

This article was reprinted from The Principled Libertarian.