The recognition by U.S. House Speaker Nancy Pelosi and former Vice President Joe Biden of Juan Guaidó as Venezuelan president is the latest demonstration of the consensus in Washington over the nefariousness of the Nicolás Maduro government. Not since Fidel Castro’s early years in power has a Latin American head of state been so consistently demonized. But the 1960s was the peak of the Cold War polarization that placed Cuba plainly in the enemy camp, and unlike Venezuela today, that nation had a one-party system.

The scope of that consensus was evident by the recent faceoff between two figures as far apart as President Donald Trump and Rep. Alexandria Ocasio-Cortez. In his State of the Union address, Trump attributed Venezuela’s economic crisis to the failed system of socialism. Ocasio-Cortez responded by arguing that the Venezuelan case is “an issue of authoritarian regime versus democracy.”

Taken together, the comments by Trump and Ocasio-Cortez complement one another. According to the narrative that dominates Washington, Venezuela is a disaster from both economic and political viewpoints. The exclusive blame for the sorry state of the economy and for the country’s allegedly authoritarian rule lays with Maduro and his cohorts.

Not surprisingly, the mainstream media have refrained from questioning these assumptions. Most of their reporting puts the accent mark on state incompetence and corruption while skirting the detrimental effects of the economic sanctions implemented by the Trump administration.

In addition, many on the left point to the economic sanctions as responsible, at least in part, for the nation’s pressing economic difficulties, but few critically examine the mainstream’s characterization of the state of Venezuelan democracy. Some oppose the sanctions but join the opposition in bashing the Maduro government.

A recent article by Gabriel Hetland, for instance, posted by Jacobin and NACLA: Report on the Americas claims that Maduro “holds onto power through authoritarian means.” The author then turns to the nation’s economic difficulties by arguing that “the primary driver is the government’s mismanagement of its oil revenue” and corruption.

During my participation in a two-month Venezuelan solidarity tour late last year in the U.S. and Canada, I often heard the statement that knowing the specifics about Venezuela’s economic and political problems is not essential because the bottom line is the illegality of Trump’s sanctions and threats of military intervention. But does international law end the discussion?

If it could be proven that Maduro is a dictator and a totally incompetent ruler, would people enthusiastically rally behind his government in opposition to foreign intervention? I don’t think so. Undoubtedly, it is necessary to take a close look at both political and economic fronts because the effectiveness of solidarity efforts hinges on the specifics. The dominant narrative about Maduro and its assumptions cannot be taken at face value, even while there are elements of truth in it.

How Far Back Do the Economic Problems Go?

The Venezuelan opposition frequently argues that neither the sanctions nor depressed international oil prices are to blame for the nation’s economic difficulties, only the mismanagement of the economy. At best, declining oil prices contributed to the problems but were not a root cause. Some opposition analysts deny or minimize the importance of oil prices as a factor by pointing out that the economies of other OPEC nations are as dependent on oil exports as that of Venezuela but have not plummeted to the same levels.

The opposition’s central argument here is that Venezuela’s dire economic problems predate Trump’s implementation of sanctions and even predate the sharp decline in international oil prices beginning mid-2014. That is, government follies with disastrous effects came first, followed by the decline in oil prices and then the sanctions. Two-time presidential candidate for the opposition Henrique Capriles claimed that the crisis began prior to the fall of oil prices but for a long time was “ignored, repressed and covered up” by the government.

There are two fallacies in this line of thinking. In the first place, the so-called economic war against Venezuela, which eventually included the Trump-imposed sanctions, preceded everything else. Washington almost from the beginning of Hugo Chávez’s presidency in 1999 did not stand by idly while he defied the neoliberal Washington consensus as well as U.S. hegemony. Washington’s hostility seriously harmed the economy in multiple ways. A water tank is emblazoned with images of Hugo Chavez, left, and his ally Lina Ron, at the 23 de Enero neighborhood in Caracas, Venezuela, July 25, 2014. Fernando Llano | AP

For instance, the George W. Bush administration banned the sale of spare parts for the Venezuelan Air Force’s costly F-16 fighter jets in 2006, forcing the country to turn to Russia for the purchase of 24 Sukhoi SU-30 fighter planes. Furthermore, the international sanctions did not begin with Trump, but rather Obama in 2015 which were justified by his executive order calling Venezuela a threat to U.S. national security. That order was followed by an avalanche of pull-outs from Venezuela by multinationals including Ford, Kimberly Clark, General Motors, Kellogg’s and nearly all the international airlines.

In the second place, oil prices under Maduro have not only been low since 2014 but nosedived, just the opposite of what happened under Chávez. This is particularly problematic because high prices create expectations and commitments that then get transformed into frustration and anger when they precipitously drop. Prices are currently slightly over half of what they were before the decline, in spite of their modest recovery since 2017.

Three factors explain Venezuela’s economic woes, not one: low oil prices, the “economic war” against Venezuela, and mistaken policies. Prominent in the latter category is Maduro’s lethargic response to the problem of the widening disparity between official prices set by the government on certain items in short supply and their prices on the black market. The government has encountered major problems in distributing basic commodities forcing Venezuelans to buy those same goods on the higher-priced black market. The system is conducive to corruption and contraband as many of the products that are supposed to be retailed at reduced prices end up being sold on the black market or sent off to neighboring Colombia.

The media are in desperate need of good fact-checkers in their reporting on Venezuela. Statements about Venezuelan democracy range from blatantly misleading to accurate with most lying between the two extremes. An example of the former is the Guardian’s claim that the Venezuelan government “controls most TV and radio stations which transmit a constant stream of pro-Maduro propaganda.” In fact, of those who tune into Venezuelan TV channels, 80 percent watch the three major private channels (Venevisión, Televén, and Globovisión) which cannot be seriously accused of being pro-government.

At the other extreme is Hetland’s assertion in his Jacobin-NACLA piece that the decision to strip Henrique Capriles of his right to run for office as a result of corruption charges was politically motivated. The statement is accurate. Actually, the move was worse than what Hetland discusses. For some time before that, Capriles, whose political positions have vacillated considerably, favored a less intransigent stance toward the government than those on the radical right, which has largely dominated the opposition of late. The move, in effect, played into the hands of the radicals and undermined efforts to bring about a much-needed national dialogue.

Those who call Maduro a dictator make two basic assertions. In the first place, the government is alleged to have brutally repressed the four-month-long peaceful demonstrations designed to bring about regime change carried out in 2014 and then 2017. In fact, the protests were hardly peaceful. Six National Guardsmen and two policemen were killed in 2014 and protestors fired into an air force base in Caracas and attacked a number of police stations in Táchira in 2017. There are different versions of the circumstances surrounding the numerous fatalities in 2014 and 2017, thus requiring an impartial analysis, which the media has hardly attempted to present. Police repression is reprehensible – and repression there was on both occasions – regardless of circumstances, but the context has to be brought into the picture. 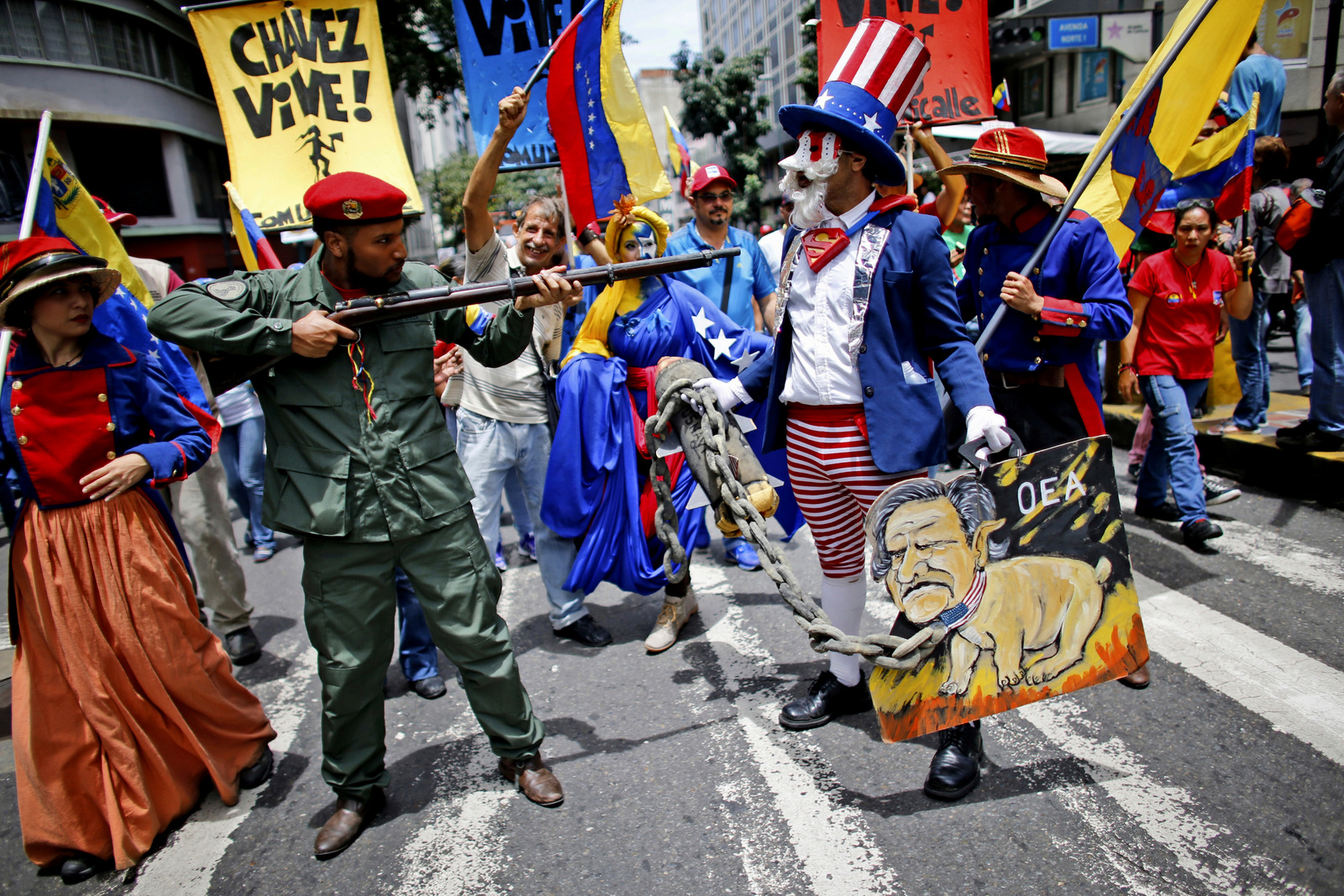 In the second place, the opposition denies that Maduro’s re-election in May of last year was legitimate because the election was called for by the National Constituent Assembly (ANC), whose existence allegedly has no legal basis. One of the nation’s foremost constitutional lawyers, Hermann Escarrá, has defended the ANC’s legality, while others formulate plausible arguments to the contrary. Again, the mainstream media has failed to present both sides or to objectively analyze the issue. Nearly all the opposition parties that refused to participate in the presidential elections in 2018, however, did participate in the gubernatorial elections of the preceding year that were convened by the same ANC. The justification for Juan Guaidó’s self-proclamation as Venezuelan president on Jan. 23 was predicated on the illegitimacy of the ANC.

Violation of democratic norms and cases of police repression do not in themselves demonstrate that a government is authoritarian or dictatorial. If they did, the United States would hardly be considered democratic. The real defining issue is whether electoral fraud takes place in which votes are not correctly counted. That accusation has been largely absent in the controversy over recent elections, even among leaders of the radical opposition.

The mainstream media and Washington politicians freely call Maduro an “autocrat” a “dictator” and “authoritarian.” More than anything that is said about Venezuela’s economic difficulties, the use of these terms has had a profound effect on policymaking. A nation’s economic problems should not justify the intervention of any sort. The real issue of contention, therefore, is the state of Venezuelan democracy as depicted by the dominant narrative. Amazingly enough, there is no major actor in mainstream politics and the mainstream media willing to challenge that narrative with all its questionable claims regarding the Maduro government.

Steve Ellner is a retired professor from Venezuela’s University of the East and is currently associate managing editor of “Latin American Perspectives.” Among his over a dozen books on Latin America is his edited “The Pink Tide Experiences: Breakthroughs and Shortcomings in Twenty-First Century Latin America” (Rowman & Littlefield, 2019).

The post How Much of the Venezuela Crisis is Really Maduro’s Fault? appeared first on MintPress News.