Witnesses told MintPress News that the tribal groups stopped the trucks and checked them, then forced them to return. In the wake of this incident, fierce clashes erupted leaving Saudi mercenaries injured. Saudi warplanes could also be seen circling the skies above the area.

The latest incident came amidst a precipitous rise in tensions in eastern Yemen, where local residents have been grappling with an increasingly brazen military buildup by Saudi Arabia and the United Arab Emirates (UAE). Just last week, Saudi troops, tanks, and artillery arrived at the coastal area of Eienah, east of al-Gaydah, without coordinating with local authorities, a Yemeni official who spoke on condition of anonymity, told MintPress.

The attack has dangerous connotations for the region and comes less than six months after three protesters were killed by Saudi forces during a sit-in opposing the Saudi Coalition’s military buildup in eastern Yemen. Following the attack on the peaceful protest, local tribes in al-Mahrah vowed to take up arms against Saudi-led forces in order to prevent the construction of more checkpoints and military bases in their country.

Al-Mahrah residents see the build-up of Saudi troops in the district as part of a pattern of malign and colonial Saudi policies in their country. Riyadh has deployed its forces in al-Mahrah under the guise of reconstruction and counter-smuggling operations. But Saudi forces have taken control of an increasingly long list of local government facilities, including the al-Ghaydah Airport, the Nishtun port, Sarfit, and the Shehn border crossing, as well as a number of coastal areas.

Last week, Ali bin Salem al-Huraizy, al-Mahrah’s former deputy governor said: “The Saudis are determined to militarize the sea and land. They [Saudis] try to build a Saudi camp [base] every ten kilos.” He called on the people of al-Mahrah province to prepare to defend their sovereignty against Saudi Arabia by force of arms if necessary.

The Deputy Chairman of the Organizing Committee for the peaceful sit-in, Aboud Qamasit, said that Saudi Arabia and its local allies have not shown any goodwill — quite the contrary, they increasingly build military bases in the province. He promised that al-Mahrah’s residents will continue to hold sit-ins and protests.

The sit-in committee, which was formed by al-Mahrah residents, said in a statement on March 12 that Saudi Arabian forces kidnapped two civilians, taking them to al-Ghaydah Airport prison, a Saudi secret prison in the region, where dozens of detainees are subjected to serious abuses and assaults according to the sit-in committee.

Ahmed Belhaf, a leader in the protest movement, said in a statement on March 2, that “there are an estimated 24 Saudi camps in the Ghaydah Airport operating under the supervision of the airport commander and training hundreds of extremist and terrorist militias.”

Saudi Arabia launched a brutal military campaign in late 2017 against al-Mahrah, which borders Oman and has remained largely immune to the broader war in Yemen, as both the Houthis and other armed groups have little presence in the province. Saudi Arabia claims that arms smuggling operations by the Houthis are being carried out from Oman into Yemen via the al-Mahrah border crossing, though the Saudis have provided no evidence to back their claim, which Oman has repeatedly denied. 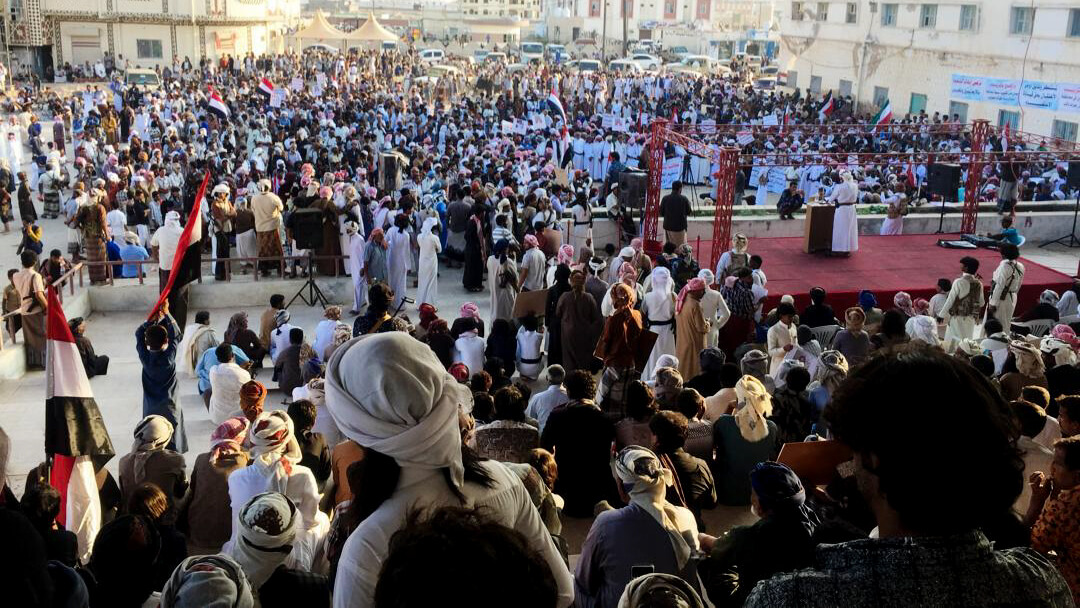 Protesters in al-Ghaydah demand the expulsion of Saudi forces from the province. Photo | Ahmed AbdulKareem

A local Yemeni official who spoke on condition of anonymity said that Saudi Arabia has begun implementing a plan to eliminate Oman’s allies in the province, including the Mahri General Council, the largest opposition party to Saudi policies and plans in al-Mahrah, which is comprised of political and tribal forces and led by Sultan Abdullah bin Isa Al Afar, a key ally of Oman.

In an effort to undermine local opposition to its military expansion in the region, Saudi Arabia plans to establish a new tribal council, replacing the Mahri General Council, which is to be led by Rajeh Said Bakrit. Bakrit was appointed by the Coalition as a governor of al Mahrah on November 27, 2017, to replace Mohammed Abdullah Kuddah after Kuddah spoke out against Saudi Arabia’s presence. The first phase of that plan includes monthly payoffs of 30,000 Saudi riyals ($8000) to 60 tribal elders and influential figures.

Many strategic analysts see the Saudi plan as a way to apply pressure on Oman, which enjoys long borders and solid relations with the residents of al-Mahrah. Much to the dismay of Saudi Arabia and the UAE, Oman also enjoys cordial relations with Saudi rival Iran, a relationship that the Coalition is eager to undermine.

In an effort to stem Saudi influence in the region, residents of al-Hawf, which lies east of al-Mahrah, announced the formation of a General Forum to bring area management back into the hands of local Mahrahi residents and organize civil projects in the area. The General Forum is being supported by the government of Oman and the effort is expected to spread to nearby districts.

Saudi forces in eastern Yemen have recently been accused of planting monitoring devices into local communications networks — developed by a foreign engineering team and supported by Bakrit, according to a local official who spoke on condition of anonymity. The official said that the devices would allow Saudi forces to monitor and spy on residents and leaders who oppose the Saudi occupation and undermine the local opposition identifying and then assassinating or arresting its leaders. al-Mahrah residents in the Hwaf district carry slogans rejecting the militarization of the province, the presence of militias, and Saudi intervention, Jan, 2019. Photo | Ahmed AbdulKareem

A Saudi military commander in al-Mahrah allegedly asked Bakrit to reveal the names of the most prominent leaders who oppose the Saudi presence in the province, threatening to ‘physically liquidate’ them. On Wednesday, members of a UAE assassination squad arrived in al-Ghaydah. The same squad is thought to be responsible for the assassination of 27 religious leaders in Yemen who opposed the Saudi-led occupation.

Saudi Arabia has also launched a campaign to recruit hundreds of al-Mahrah’s young for a local security force, called the “Mahri Elite Forces” and modeled around other Coalition-backed mercenary forces operating in Yemen, including the Hadhrami Elite Forces in Hadhramaut province, the Shabwani Elite Forces in Shabwa, and the Pioneer Security Belt Forces (al-Hizam) brigades in Aden.

The campaign has sparked dismay amongst al-Mahrah’s tribes, who held a meeting and issued a subsequent statement on Monday saying: “Trying to copy the bad experience of the security belts in Aden and transfer them to al-Mahrah would open the way for armed conflicts and undermine local authorities.” The tribes called on the young Mahrahis to refuse to join the Saudi forces, saying the creation of the paramilitary group would create a combustible environment that threatens to upset the local balance.

Like many paramilitary forces created by the Saudi-led Coalition in Yemen, the Mahri Elite Force was formed by recruiting members from specific tribes, not on the basis of one national army for the country as a whole. The predictable impact has been to exacerbate tribal differences, revive the desire for revenge among tribes, and create the desire for separate states.

Al-Huraizy said in a statement:

The UAE seeks through its armed formations to create a new situation that will enable the UAE to dominate Yemen, control its ports and capabilities, and rob the national decision, violate its sovereignty and bring the country into chaos.”

Top Photo | Mercenaries allied with the Saudi-led coalition are pictured at the port of Aden in Aden, Yemen, Dec. 12, 2018. Jon Gambrell | AP